Keurig’s constant effort to bring new brewers to the coffee market has resulted in a brand new technology that should improve the way a K-Cup is brewed. This technology is now introduced in the K-Supreme brewers which you’ll learn more about in this guide.

K-Supreme works in the same way any Keurig brewer works, simple and quick. What is special about it is the MultiStream brewing technology, which features a 5 entrance needle that punctures and saturates the coffee grounds inside the pod more evenly, resulting in a better and more flavorful cup of coffee.

Here’s a recap of all the differences:

Then you have all the smart features, like BrewID, WiFi connectivity, Smart Auto delivery and the phone app… those are only available on the SMART models.

Features of Each Model

K-Supreme, K-Supreme Plus, K-Supreme SMART and K-Supreme Plus SMART, these are the four variations of the K-Supreme. Let’s have a look at the features of each model. MultiStream is part of all three models, so that’s a main feature on all K-Supreme models.

This is the entry level model, and it comes packed with nice starter features. To start, it has four brew sizes: 6, 8, 10 and 12 oz, which are the most popular on any machine. To customize your cup, you have the option of a Strong brew, and an option for Over Ice coffee, which still brews hot, but adjusts the parameters of the brew so it won’t taste watered down with ice.

This model has a 66 oz water reservoir, which is enough for several brews. The reservoir is repositionable, so it can sit on the side or the back of the machine, whichever is better for your countertop space.

The control panel sits on top of brewer, and it’s a basic one with multiple buttons, one for each selection.

The Supreme Plus is next in line and it includes a few extra features. One of the best features in the model is Programmable Favorites, which is a way to save individual preferences for up to three users. It will save preferred brew strength, temperature and size for each user.

Speaking of customization, this models offers 3 strength settings and 3 temperature settings, as well as Over Ice option. And for brew sizes, it starts from 4 oz and up to 12 oz.

The control panel has button selections as well as a small display that will show you your selection of strength and temperature control. You’ll also find three user buttons to save individual settings.

The reservoir of the K-Supreme Plus is a generous 78oz capacity, but this time, it is not repositionable.

We’ve now reached top of the line with the SMART editions of the K-Supreme. As its name suggests, this one is going to have a number of Smart features that the previous two models don’t have…

BrewID technology is an automatic pod reader integrated within the machine. It automatically recognizes the pod you inserted and adjusts the machine’s settings accordingly to make you a cup optimized for best results. Of course, you can always change these settings if you don’t like them.

The SMART models have 5 brew serving sizes, but what’s interesting is that they also have 5 strength settings and 6 temperature settings in addition to the Over Ice setting.

Programmable Favorites on the K-Supreme and Plus SMART include 10 users, so this is the perfect machine for a larger family.

And of course, the brewer wouldn’t be ‘smart’ enough if it was not WiFi connected. Connecting your brewer will allow you to brew from anywhere, store and manage your recipes, receive personalized beverage recommendations and use voice commands using Alexa or Google Home. And since BrewID tracks your pod usage, you’ll get notified when you’re running low on pods. You can set up automatic ordering and deliveries so your new pods arrive before you’re out of them.

The control panel on the K-Supreme Plus SMART features press buttons and an OLED screen which makes customizing your cup even easier.

What’s The Difference Between K-Supreme SMART and K-Supreme Plus Smart?

these two have minor differences:

You can learn more about K-Supreme Smart on Keurig’s website.

Other features worth learning about

I won’t call these issues because it’s not a problem with the design or manufacturing. But here are some common issues that will require troubleshooting after a while of use:

Keurig K-Supreme Plus vs. Plus C 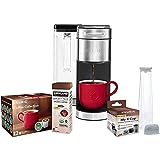 The K-Supreme Plus C isn’t a model on its own, but a name of a bundle. It includes the K-Supreme Plus, Water filter with handle, reusable My K-Cup coffee filter and 15 K-Cup pods. 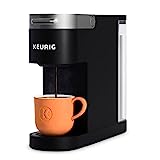 The K-Slim is a compact brewer with basic features. To start, it does not feature MultiStream technology, so it has the single entrance needle. To be honest, this will not make a whole lot difference to a lot of people. So here are other differences that will actually matter:

It has a 46 oz water reservoir, much smaller than K-Supreme’s.

It does not have Strong brew, Over Ice or temperature settings.

It can accommodate travel mugs up to 7” tall.

This machine was made for anyone looking for a compact and slim Keurig brewer, and it’s perfect at this with a width less than 5” wide.

K-Select is Keurig’s classic brewer that comes with the basic features. It brews 4 cup sizes: 6, 8, 10 and 12 oz. It has a Strong Brew button and a decent 52 oz water reservoir.

The features of the K-Select are not much different to K-Supreme (apart from MultiStream Tech). Aesthetically, the K-Select is larger (Dimensions 12.5” H x 9.2’ W x 11.6” D) with a smaller reservoir than K-Supreme, which has a 66 oz reservoir and smaller dimensions.

Keurig K-Supreme Plus vs. K-Elite

Again, first thing to put aside here is the MultiStream technology which is only available on the K-Supreme line (As of the time of writing).

The K-Elite is quite a premium Keurig brewer that’s been available for a while now. It has a nearly perfect rating, so it’s really one to consider.

Features K-Elite has that are not available on the K-Supreme are Auto on/off, digital clock, High Altitude setting and hot water on demand.

Is the K-Elite better than the K-Supreme?

It does have some better features, but are they features you need? I find the K-Elite to be more comparable to the K-Supreme Plus, and in that case, the latter wins.

Does K-Supreme Use the Same Pods as other Keurig Machines?

Yes, it is compatible with the same Keurig pods as other machine. You can use branded or generic pods as well as reusable filter pods.

Is Keurig MultiStream Technology Worth It?

This is a tough one to answer, because the answer is subjective from one person to the other. To be completely honest, reviews on this technology have been quite mixed. Some people found it to be great, others found no difference whatsoever.

Technically speaking, having a needle with five streams of water instead of one sounds like a better idea to fully saturate the coffee grounds inside the K-Cup. But this has never been an issue with previous models that have a single stream of water. So what I’d suggest is, don’t buy the machine for the sake of MultiStream only, if you like the other features or the design, let that be your decision making point.